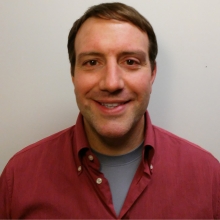 Aaron A. Toscano is an Associate Professor in the Department of English at the University of North Carolina at Charlotte. Dr. Toscano mainly teaches courses in Technical/Professional Writing and Rhetoric. Other course topics include "Science Fiction and American Culture," "Science, Technology, and Society," and "New Media: Gender, Culture, Technology." Currently, he is preparing a four-week study abroad course for June 2022 in Salerno, Italy. Although most of his courses focus on American culture, he weaves in discussions of technologies from Italy (and elsewhere) for comparative study. The new study abroad course will allow students to immerse themselves in a different culture to consider a variety of texts they will encounter: street signs, billboards, monuments, and many more. Interested students should visit the Office of Education Abroad's programs and search "Intercultural Communication, Italy"--available in early October 2021.

His research focuses on the ways cultural texts reflect prevailing ideology. Texts are cultural repositories with a variety of meanings, requiring attention to the polysemic nature of both words and contexts. His overarching scholarly goal is to identify the ideologies and rhetoric of discourse related to technology and the social constructions of technology, an approach firmly grounded in the humanities. Rhetoric is not a science in the modern understanding of the scientific method; additionally, it is not a study committed to replicability. At best, rhetoricians can stabilize meaning for a moment in order to explain how a text conveys some meanings, but there is no universal, ideal(ized) definition of rhetoric that makes it a uniform methodology for scholarship. His first monograph Marconi’s Wireless and the Rhetoric of a New Technology (Springer 2012) analyzes the ways in which the discourse surrounding Guglielmo Marconi’s wireless adhered to turn-of-the-last-century Western values. Before the wireless ever became commercially viable, discourse—speeches, texts, and various media—rhetorically constructed it for early twentieth-century audiences. His second monograph Video Games and American Culture: How Ideology Influences Virtual Worlds (Lexington Books, 2020) analyzes video games to demonstrate how they reproduce American ideology. Although video games do not lead gamers to anti-social behavior (a myth the book debunks), as cultural repositories, they are not neutral. Media reflects culture; therefore, a violent, sexist, homophobic, chauvinistic culture produces texts embodying those values. This book does not shy away from these difficult-to-stomach observations.